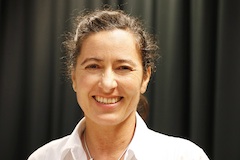 Patria Hume is Professor of Human Performance at the Auckland University of Technology (AUT) Sport Performance Research Institute New Zealand (SPRINZ). She is Director of the AUT J.E. Lindsay Carter Kinanthropometry Clinic and Archive and a founding member of the SPRINZ Sports Kinesiology Injury Prevention and Performance (SKIPP) group, the Rugby Codes Research Group, the GymSport Research Group, and the Triathlon Research Group.  She is an active associate member of the National Institute for Stroke and Applied Neurosciences, and the AUT Centre for eHealth.

Patria was the inaugural Director of SPRINZ from 2000-2009 (taking a break due to her kidney transplant), then 2012 until she became Associate Dean Research for the Faculty of Health and Environmental Sciences from 2013 to 2015.

Patria received the 2016 International Society of Biomechanics in Sports Geoffrey Dyson Award.  This is the most prestigious award of ISBS, recognising individuals who embody and carry out the primary purposes of the Society.

Patria has 598 publications in peer-reviewed journals, book chapters, full papers in conference proceedings, or technical reports.  She has supervised 22 PhD students and 11 Masters thesis students to completion and is currently supervising eight PhD students and one MPhil student.  Topics have ranged from injury prevention strategies for rugby league such as instruments mouth guards and ear patches, to the cause and possible prevention of Achilles tendon injuries in triathletes, to finding ways to improve performance in defence personnel via 3D body scanning and ergonomics approaches.

Patria has a PhD in Biomechanics (Otago), MSc (Hons) with a double major in Sports Physiology and Sports Psychology (Auckland), BSc with a double major in Physiology and Psychology (Auckland), Postgraduate Certificate in Epidemiology (Rollins School of Public Health), Criterion Certification in Anthropometry (ISAK level 4), and ISAK Certification in Photoscopic Anthropometry. Patria undertook post doctorate studies 1994-1996 in sports injury biomechanics and sports injury prevention at the University of Calgary, at ETHZ in Zurich and at the University of Wollongong.